Brynleigh’s mom, Lauren, had to trust her motherly instincts when fighting for a diagnosis for her daughter. She shares their story in this video.

Lili was 6 months old when she was diagnosed with seizures. In this video, Lili's mom, Natalie, shares their diagnosis story.

Finding the right diagnosis can help you better understand your child's behavior and response to treatments, just like in Zora's story.

Have you started the conversation with your doctor?

While everyone’s diagnosis story is different, many started by trusting their instincts and having a conversation with their doctor. Knowing what questions to ask and how to explain the signs you are seeing are the first steps to getting a more specific diagnosis.

Learn about a treatment option

See how a treatment option may help reduce seizures.

Explore the growing number of resources for people with LGS, Dravet syndrome, and TSC.

Experiences vary, but can include

According to the Epilepsy Foundation, treating seizures early and appropriately is critical to maximizing developmental potential.

Contact your doctor right away if you think your child is having infantile spasms.

Are you sure you want to exit the assessment?

By clicking “Yes” below, you'll lose the progress you've made on your assessment. Still want to leave?

No, stay here Yes, I want to leave

Get a free digital copy of Living With Magazine sent directly to your inbox. 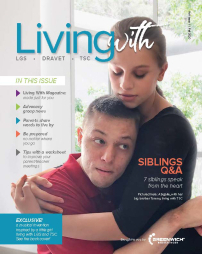 Enter your email to receive:

You are now leaving SeizuresAreSigns.com

By clicking “Continue” below, you will be leaving SeizuresAreSigns.com and directed to another site.

By clicking “Continue” below, you will be leaving SeizuresAreSigns.com and directed to a site about a treatment option for people living with Lennox-Gastaut syndrome, Dravet syndrome, or tuberous sclerosis complex.

By clicking “Yes” below, you will be leaving SeizuresAreSigns.com and the progress you've made on your assessment will be lost. Still want to leave?

No, stay here Yes, I want to leave